The T600 H20 series of two-way radios from Motorola Solutions combines a waterproof body, a flashlight, and the ability to float/light up in case dropped in a river, into a powerful, easy to use handset that’s designed to thrive outside. This is my review.

The T600 series radios come in a pair of two headsets. Each is built from a durable plastic to produce a sturdy, waterproof body that manages to float and illuminate if submerged. There are two push to talk buttons on the left side of each unit, one high power and one low power to save battery, with the primary controls located on the front. The radios come with white and red LED lights located on the bottom of the radio, toggled on or off via a small button located on the upper left corner of the headset. The removable belt clip doubles as a whistle, and the handsets include emergency alert functions, channel scanning, hands free talking, and the ability to listen in to 11 different weather channels. The kit includes two headsets and a split USB charger, so two units can be charged at once via one cable, and they retail for about $119.99. 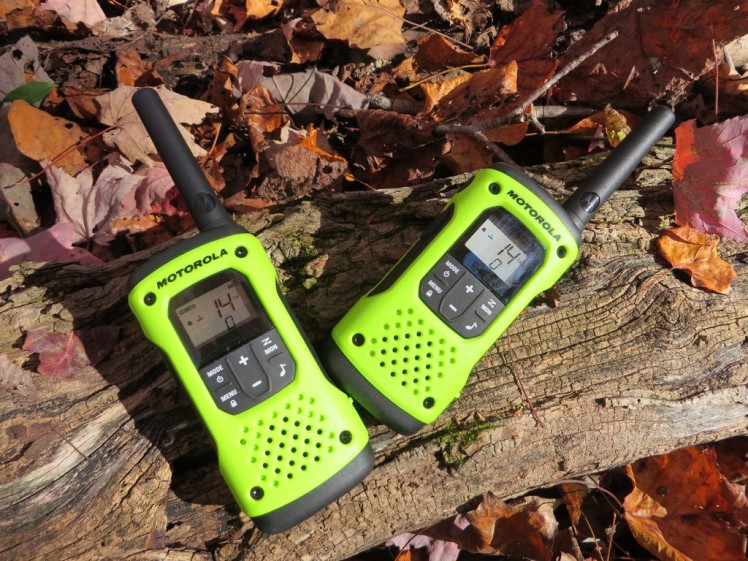 The T600s perform pretty well in real world conditions. I’ve found them able to cast a clear signal through miles of dense trees, buildings, around small bends, and over large distances across valleys and open areas. They’re rated for up to 35 miles in a peak to a valley situation, which seems about right in best case conditions. Realistically, you can expect a couple of miles in the woods or in town assuming no thick obtrusive structures like cities or mountains. I’ve found that as long as I kept clear of mountain peaks I was always able to get my message across when hiking, clear and loud with little to no interference after picking a clear channel.

As far as use goes, they’re quite easy to operate. All of the adjustments are available on the front of the device and are straight forward to figure out, even without the manual, assuming you have some experience with these types of devices. It’s easy to change frequencies and even select a privacy channel to reduce the possibility that someone might be listening in or interfering with your communication. Sending out a message is as simple as pressing one of the push-to-talk buttons on the side. There are actually two of these buttons, one that sends out a low power signal and a second one that pushes a more powerful signal, at the expense of battery. It’s a great way to preserve battery life and using the more powerful signal can make a difference in tough conditions, such as one instance where I was trying to broadcast just over a mountain top to hikers below me on the other side, where the high powered signal was just enough to get through.

The walkies are built pretty well also. The body is tough, thick, and obviously designed to take a light beating while shaking off rain and dirt. All of the buttons are protected under a weatherproof cover, and the USB charge ports are located under a protective cap to prevent water from getting in. I’ve had no issues with leaving them out in the wet grass, and they survived my torture tests with no issues.

Smaller features like the built in flashlight, an emergency whistle, being able to listen in on weather stations and scanning all channels for an active signal can really be useful in certain situations. Imagine deciding whether or not to bail off of mountain due to some sketchy clouds looming in the distance, or trying to contact help for a fellow hiker with an injury. The flashlight has come in handy as a partner camper forgot to bring a headlamp, instead relying on the radios light to get around in the dark.

The battery life lands me at just about two days of light use, turning them off at night when heading to bed. That’s pretty impressive considering the all day use, and battery can be further enhanced if you have your cooperators only turning on the walkies on intervals, such as the top of every hour or at sunset daily, allowing them to be used for days. Extended batteries are available for those who plan to be out and about for longer periods of time.

I found on several instances that I was able to accidentally turn on the LED light without noticing. The button is positioned in a way that makes it prone to activation if you’re not paying attention to where you’re putting your hands when clipping it to a belt or backpack. The LED light is housed on the bottom of the unit, and shrouded by plastic, so activation is likely to go unnoticed during the day. It’s best to check that the lights haven’t been turned on after finicking with the device, or risk losing some battery life. Thankfully, it’s never drained my battery entirely as they appear to be quite power efficient.

As with other walkies in this range, cresting over a mountain, diving into a rock formation or going into a dense building will likely cut off the signal to anyone on the other side. Certain physics come to play here so you’ll need to keep this in mind when staying in communication with group members, often times requiring a trek to a peak or around a bend to get the signal out. Treat the signal almost like it’s line of sight, with the benefit of not actually having to see anyone. This will give you a good idea of what devices like these are capable of.

The T600s have proven to be useful for keeping in contact slower hikers in large groups, coordinating with others from base camp, or just while out enjoying the scenery where cell phone service might not be reliable. The included LED flashlights have come in extremely handy, even if I have occasionally turned them on without meaning too. Smaller additions like an emergency whistle and weather scanner can make a big differences in emergencies, and are greatly appreciated when they’re needed. They’re tough, reliable, and do a good job of providing a clear, loud signal, assuming you consider mountains and buildings when attempting to communicate. Overall, solid, reliable walkies at an affordable rate.

For more information Motorola Solutions and their gear, check out http://www.motorolasolutions.com/ or here to read more about this product in particular.

For information on our rating system and our testing procedures, check out our About us/ Contact us page.

I want to extend a huge thanks Motorola Solutions for providing this gear for review. We couldn’t do it without their help. Our full disclosure can be found here.

Thanks as always for reading! Don’t forget to follow our blog for future updates and reviews. If you have any questions, comment below, send us an email, or find us on Twitter or Facebook (links on the right).