With technology becoming more and more prevalent in the backcountry, having a way to power these devices is becoming a necessity. Oregon Scientific has decided that the best way to recharge the devices we’re using outside is to combine a power bank with something we’re already using, a lantern. The idea here it to enhance convenience, lower weight, and minimize costs all at the same time by eliminating redundancies in equipment. I’ve put it through it’s paces, and this is what I think.

The camping lantern is a combination of a powerful 440 lumen LED light and a large 8000mAh rechargeable battery. It’s built around a tough weatherproof, IP65 rated plastic body with an integrated carabiner clip and weatherproof covers over the two USB connections. One port is for for charging the lantern itself with the other being used to charge other devices. The LED light is shrouded in a soft white diffuser located on the bottom of the unit. On the top of the unit lies a single button for operating the device. A double click powers on the LED, while single clicks cycle through the three brightness settings and the strobe function. The light lasts 84 hours at low (200 lumens) and 24 hours at high (440). It weighs 12 ounces (345 grams), includes a USB cable for charging, and retails for 29.99 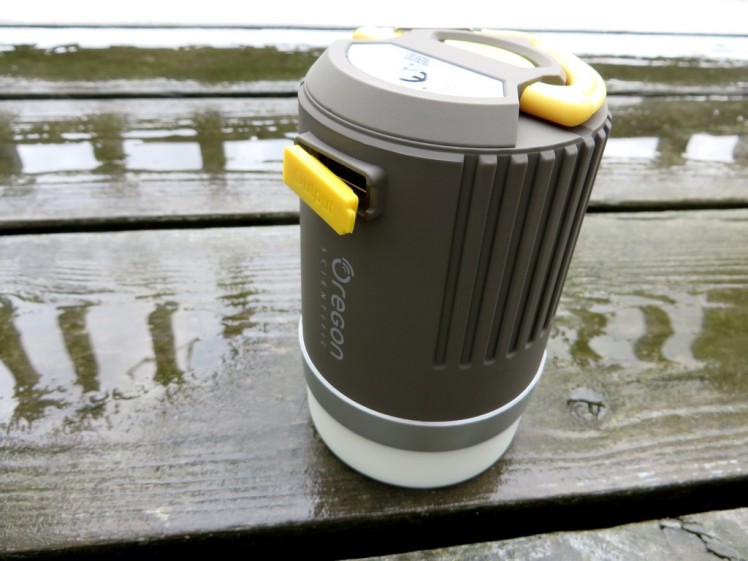 The lantern provides an excellent soft glow that’s easily powerful enough to light up a large camp site. At 440 lumens on it’s brightest setting, it’s almost too bright for most situations, but it’s nice to have the power there if you need it. On the lowest setting, it provides more than enough output to light up even large car camping shelters, literally for days with non-stop use. The diffuser allows light to be released from the bottom and from the lower end of the sides. This produces a nice even glow from most angles when it’s hung above, without shining up into the eyes while used flat on a table. The integrated carabiner clip allows it to be hung from a tree, inside a tent, or just about anywhere else thanks to the flexibility the attachment point provides. And, it’s entirely functional just sitting on it’s base too, making it great for playing cards or cooking at night.

It’s quite simple to use. A double click will turn it on or off, and single clicks from there will switch between power settings settings; medium, low, high and strobe in that order. Requiring a double click to turn it on practically eliminates any risk of accidental activation, meaning it’s always going to have a charge when you need it, even after being stuffed into a backpack with other gear that might otherwise turn on other lamps by pressing into them. The button has a clear and satisfying click, and it’s easy to find in the dark too.

Durability is quite good thanks to it’s stout design. It feels mostly solid, with the exception of the obviously hollow diffuser on the bottom. The clip is rugged and provides more than enough strength to hold the lantern when clipped, and the USB covers do a great job of keeping out water and dirt during even a hard rain, so if you accidentally leave it out during a storm, it’s going to be just fine.

Packing in a massive 8000mAh battery at just 29.99, it’s an exceptional value. To provide a comparison of battery capacity, my phone has an unusually large 3000 mAh battery (verses 1,960 with the common iPhone 7), and I get a solid two days of use from one charge. I’ve found the Oregon Scientific lantern to be capable of charging it back up about 2.5 times, or twice with ample spare charge to power the lantern for a couple more nights. Many power banks alone cost more than this device, with less than half the power. Combine this with the high quality build and LED, and it’s one of the best deals I’ve come across for any product. 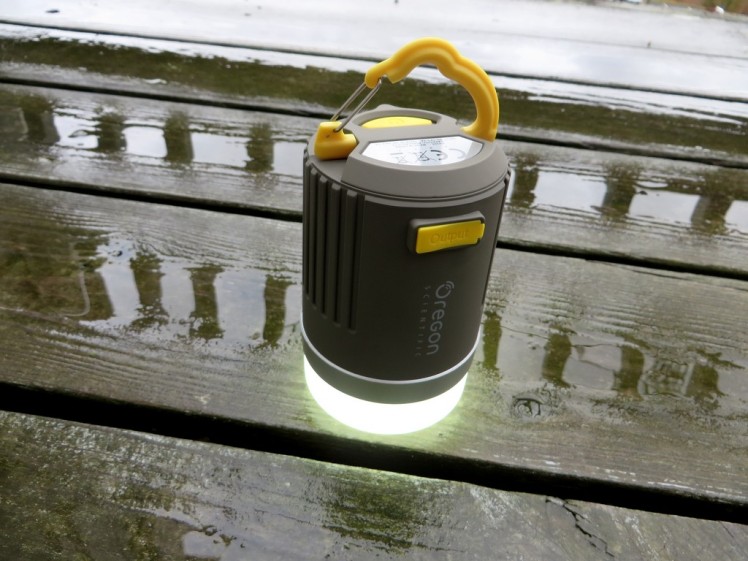 I wish the device could remember what setting it was on when last activated. Instead, every time I double click to turn it on, I have to cycle from Medium to low (my preferred setting in almost all cases) to get to the power output I want. It’s a minor detail and it’s only a single extra click, but it’s something to be considered for future revisions.

12 ounces is a bit on the heavy/bulky side for a backpacking lamp, but if you’re planning to carry a lantern and a battery bank already, this will likely save you some weight and mass. It’s perfect for car camping and keeping around the house though, as it takes up minimal space thanks to its compact build.

The Oregon Scientific Camping Lantern with Power Bank is a wonderful device. It’s simple to use, fairly light weight, and provides an exceptional value when compared to other items on the market. It love the impressive battery life and the ability to charge my devices in a pinch, and it’s perfect for keeping around the house in case of a power outage. It’s convenient, durable, weatherproof, bright, and does exactly what it should without having to fuss with complicated settings or multiple buttons. It’s a bit on the hefty side, but that’s what happens when you pack in a powerful battery into a tough shell. I’ve never found a better value on such a well designed product, and that makes it easy to recommend.

The Highest of Recommendations

For more information on Oregon Scientfic and their wide range of gear, check out their website.

For information on our rating system and our testing procedures, check out our About us/ Contact us page.

I want to extend a huge thanks Oregon Scientific for providing this product for review. We couldn’t do it without their help. Our full disclosure can be found here.

Thanks as always for reading! Don’t forget to follow our blog for future updates and reviews. If you have any questions, comment below, send us an email, or find us on Twitter or Facebook (links on the right).