Backpacking isn’t all just climbing mountains, justling through the forests, and fighting bears off of your food bag. Backpacking does have its down times, hiding from storms under the safety net of your tent, or hanging out by the camp fire with your crew.

This is where Hive comes in.

Hive is a board game, but without the board. You play wherever you want, and that’s the beauty of it. 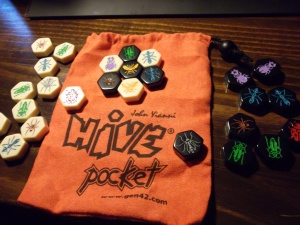 The game has three variations, The Original Hive, Hive Carbon(a black and white variation) or Hive Pocket, a smaller lighter version which is  reviewed here.  There are also the  Lady Bug and Mosquito expansions which add more strategy and mix up the game a bit for advanced players.

The idea is simple, a bit of a simplified chess in many ways. Your goal is to simply surround the queen bee of the opposing player so that it cannot move.

There are two players each with their own “hive” or group of pieces, black and white. You start out by adding a single piece to the game. Your pieces must always touch another piece, and the two “hives” must always touch. Your next turn, you either move that piece, or add another piece. Your decision. You can add as many pieces as you want, and they are never taken away. You have several pieces that all move in unique, but very simple ways. The queen bee moves one space, as long as it’s touching another piece. The  beetle also moves one space, but can also move onto other pieces, immobilizing them. The grasshopper will jump one piece, the spider moves three spaces, and the soldier ant moves as many as he pleases. The Lady Bug and Mosquito expansion mixes the game up a bit more, and adds more challenge and dept for the vets out there. To win, simply surround the queen in any color. Yours or theirs. 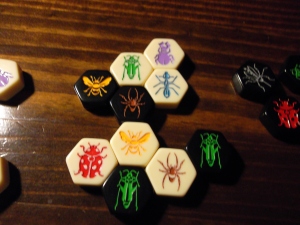 It’s a very clever game, and it’s easy to pick up and play. There is no luck to the game, which is great considering I don’t have any. It can be played just about anywhere given you have a fairly flat playing surface. The pocket variation is light enough to carry on most trips and the being a smaller version doesn’t inhibit the fun at all. The expansions are great at adding dept and challenge for those who are looking for more of a fight. The game comes with a nice travel sack and clear instructions.