It’s seemingly rare, the idea of doing things the hard way just because they’re harder, but that’s exactly the idea that I had. 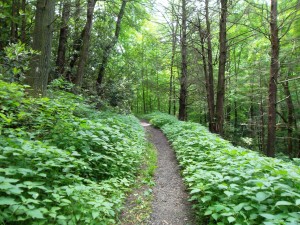 Typically, people will hike through this section from Carvers Gap to US 19E in which you basically drive to the top of the mountain before hitting the trail. Most will hike out to the first balds and turn back. The rarer, more ambitious will embark in a much longer two day hike through the section.  This is mainly a downhill trek, with a few tough climbs that gain about 800 feet, serving up massive vistas hidden in the smoky mountains,  unseen by most.

Flip that around, starting at US19E, and you suddenly have a nice, long, 14 mile, 2 day mountain climb which gains over 5000 feet in total climb. This was what I wanted, and this is what I did.

The climb was a slow, enduring battle of both the body and the mind. The rewards however were well worth the electrolytes we lost due to the profuse sweating. “If they charged for this, I couldn’t afford it” I said as we summited the first big goal, a massive bald atop the mountain which offers up 360 vistas over the mountains surrounding us. I wasn’t even aware that this particular bald existed, as most never make it past Big Bald and Jane Bald near the highway. There were no crowds 7 miles from the trailhead. The occasional AT through hiker would appear from the tall swaying grass, but the locals were miles away. The view was indescribable. Tall, rolling, round mountains covered in soft grass with the occasional chunk of limestone poking it’s head up through the blooming June flowers. 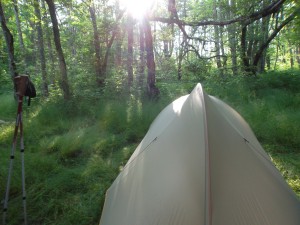 We found camp about 8 miles into the trek atop another peak of the mountain. Sunken into the trees this particular spot was covered in soft grass, and protected from the potentially fierce winds by a conjugation  of small trees. Exhausted, happily and expectantly, we set up camp atop the soft bedding. Dinner was a heaping helping of home cooked and dried spaghetti with mushrooms, followed up by home baked chocolate muffins (well worth the extra weight). Slumber came easily, and early, at 9am on the dot. The sun fell behind the trees, and my eyelids followed in the example.

Day two two I finally opened my eyes at around 8 am and  was presented with more beautiful weather, but the threat of distant storms kept watch over us. A quick breakfast of oatmeal and more chocolate muffins gave us the courage to finish the climb ahead of us. We packed up shop, and hit the trail revived and anxious to see what other surprises awaited us.

Miles into the mike the mountain somehow found it appropriate to keep pushing mounds of dirt onto our plate, even though we were already full. We kept climbing. The mountains finally changed gears, and shifted into a mellow, relaxing rolling ridge hike. 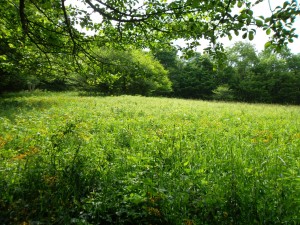 Following the dark path through patches of blueberries was distracting enough that I managed to step onto a copper head snake. Perhaps instinctually, the snake curled into a ball and rolled down the trail onto the boot of my buddy Jeff who was started. I however was oblivious to the fact until he pointed it out. I carefully convinced the striking reptile off the trail with the help of my trekking pole and continued on our mission unscathed, luckily. 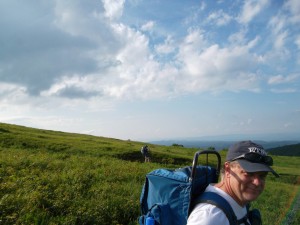 We finally submitted the mountain at around 2:oopm. The sensation of landing on the top of the mountain was refreshing, but didn’t compare to the handful of dried mango and pineapple that had been reserved for just this occasion. We finished up the last few miles of trail with plenty of company. As we grew closer to civilization the crowds began to spawn, and we were reminded of the commodities that awaited us, a trips to Bob’s Dairy land for a very late lunch.

We nearly beat the grumbling storms in the distance, but with the last half mile of the trip the curtain of rain we had been evading in the distance finally draped us, soaking us head to toe, just before we reached the car.