Today, we would assault the first “pass” of the Four pass loop. The goal was to summit West Maroon Pass, descend in the valley and rest up for tomorrows’ summit, Frigid Air Pass.

Shortly after leaving camp, we were devoured in the most beautiful meadow I have ever seen. The valley opened up, with the tall maroon and granite walls around us, while the valley floor exploded in a variety of colors, and thousands upon thousands of blooming wildflowers, segregated only by the creek that flowed through the middle.  We made our way through the valley, slowly climbing as we approached the summit.

I knew from the map that our first pass would be on the right, but as we reached farther and farther into the valley, I just couldn’t see where we would cross the massive peaks.

Despite being an easy hike, with a slow, steady elevation gain, my lungs just couldn’t pull in enough oxygen. I was gasping for air where I could normally be jogging small, insignificant hills. I was quite frequently stopping to catch my breath, just walking up this slow climb. It was apparent that I wasn’t adjusting well to the elevation. Looking back, about half of the group was struggling just to get oxygen in their lungs. This was going to be a struggle. 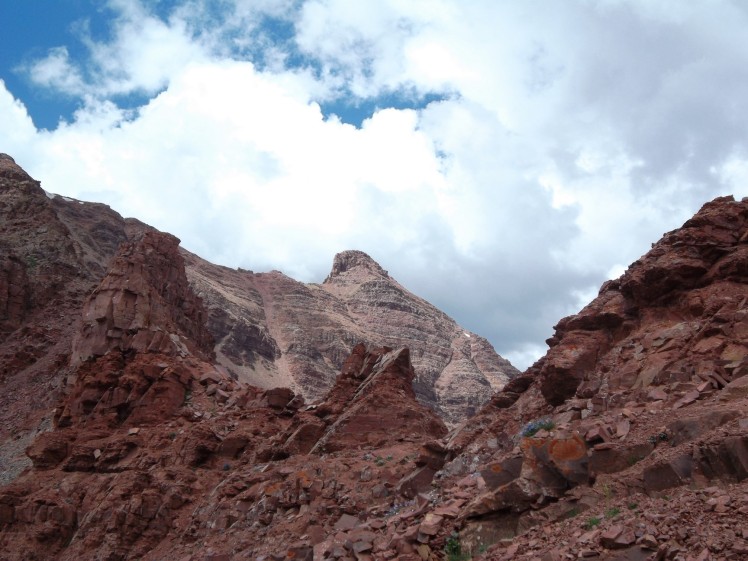 We decided to stop for lunch in a great flat spot laying high in the valley. The view was fantastic, with the confetti of flowers all around us, with the depths of the valley now partially below us. While cooking lunch, I continued to perplex over our destination. We were now in an inverted peninsula, surrounded by massive ridges of stone and rubble on every side, except the side we entered. There was no where to go…was there? Determined for answers, I lined up the map, shot a bearing, and identified our target. I peered into the eyes of solid, intimidating, granite wall. Deep in the wall, you could see the faint outline of a thin, unstable zig zag carved in the face, going at what seemed to be an impossible angle. This was West Maroon Pass.

What began as heavy breathing, had transitioned into suffocation.  With every foot of progress, the oxygen faded. The closer we came to the peak of the pass, the further it seemed to be. My body was now begging for oxygen. Breaths felt hollow and useless. Walking now felt like a dead sprint back home. My progress slowed to steady and frequent stop and go movements. A few slow footsteps, then a few seconds to breath. I would walk until my heartbeat was pounding in the back of my head, and stop to recover, dizzying when I tried to squeeze just a few more feet in before stopping. Our legs continued to push up the ridge for what seemed to be hours. The climb to over 13,000 feet seemed impossible at this point. I felt so weak, so fragile, and yet there was no stopping.

Somehow, I found myself nearing the top of the West Maroon Pass. As I summit the pass, my eyes cleared the previously obstructed view. High above the valley, I stood, gazing for miles in every direction. The wind blew in the cool air from the distant masses of snow and ice. Tall mountain ranges encircled me from every angle. As my body recovered from the oxygen deficit, I began to feel like I had just began. Energy and life filled my body as I celebrated the climb with my companions, some of whom beat me to the top, some of whom were still working their way up the massive pass. I remembered, now, why I had come. To live.