The Sierra Designs Lightning 2 FL is an update to one of my favorite tents, the Lightning 2 UL. Lighter and more storage space is the main attraction, but what else has changed with the 2015 update and is it worth an upgrade or first time buy?

Aside from the weight difference and the larger vestibules, the tent is mainly the same. A few other notable differences include the ability to completely zip up the front door, whereas the original left a small gap at the top, and a slightly breezier rear of the tent, allowing for more air flow. 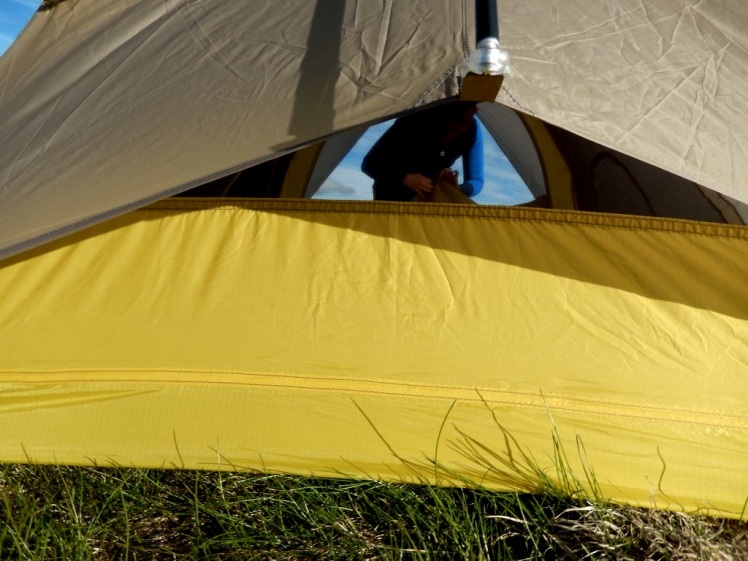 The Lightning ditches standard door/vestibule entrances, and replaces that with a front facing vertical door, with “gear closets” on the sides of the tent, accessible from the inside or out. The door is double layered, with an outer mesh, and an inner waterproof layer with a zipper allowing the lowering of the waterproof barrier for more ventilation or viewing of the outside. An above awning keeps out the rain and sun. 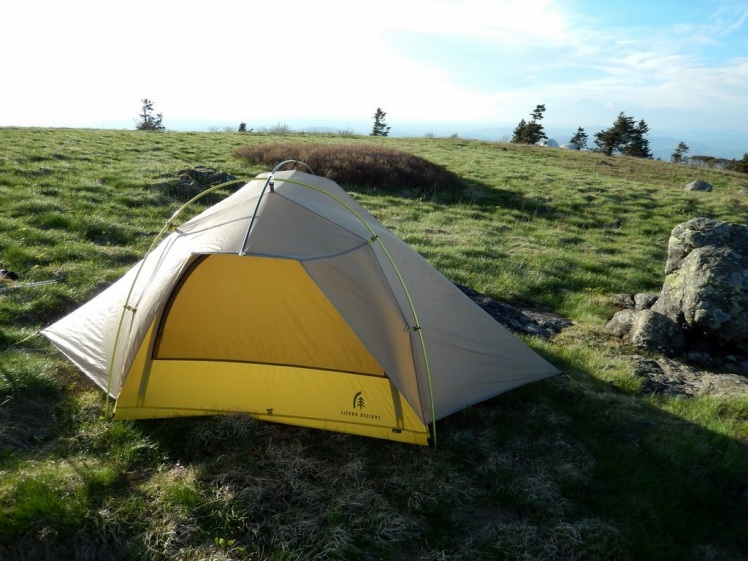 The tent pitches with a combined tent body and rain fly, which are permanently fixed together. The framing is a single long pole, with an arch on each end. There are two small aluminum stays, one in the awning to give support, and one on the ceiling of the tent to widen the interior. DAC NSL poles, DAC J-stakes, and 15D nylon floor with a 20D polyester ripstop body finish the build. The tent weighs in at 3 lbs 4 oz (packed) and retails for $369.95. 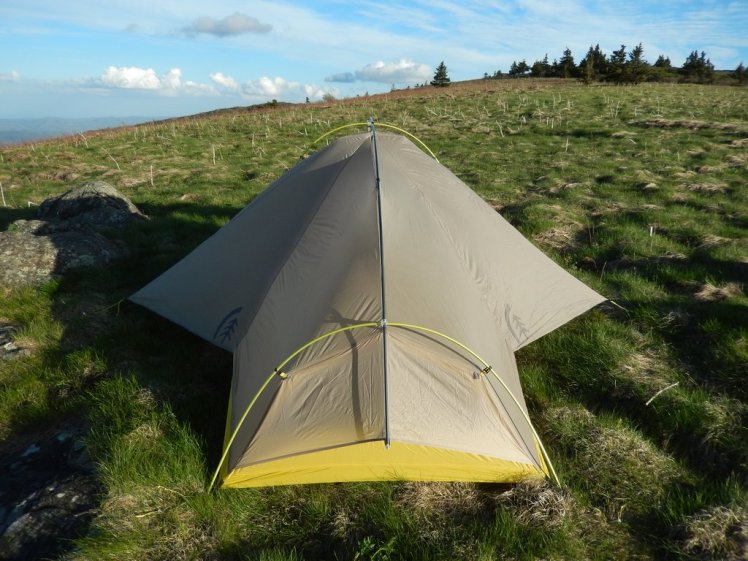 Moving gear storage to the sides of the tent is a hugely understated feature of this tent. It gets all of your gear out of the way of entering and exiting, while also allowing quick access from the inside or outside of the tent. No more climbing over packs, or getting gear wet while opening the tent doors. The improved gear closets provide huge amounts of storage, and never once have I ever even had to stack gear up to make it all fit inside. I could sprawl out my equipment instead of piling it up in a heap. The internal zippers allow for quick access to anything you need. 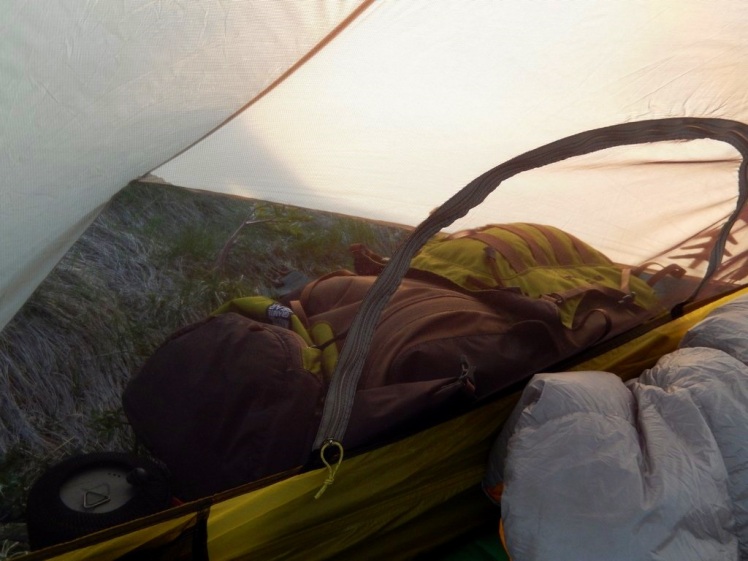 The above, combined with the vertical front door and vestibule provides the most convenient entry and exit of any tent on the market that I’ve tested. The awning furthermore provides an opportunity to unzip the protective layer of the door, exposing the breezy mesh for viewing during the rain, or increased ventilation. This is lovely while being trapped inside during a storm, as it eliminates that feeling of claustrophobia while pairing that age-old past time of watching the rain. I’ve never had rain get inside while leaving the waterproof door open, except perhaps in sideways blaring rain.

Stability is impressive. Perched atop a completely exposed 6000 foot peak, the harsh winds of the East Coast rain season couldn’t budge it. 4 guy out lines connect to the four corners, while the simple one piece body/rain fly connect to the pole and provide a surprisingly robust frame. Rocking winds left the tent undisturbed, with minimal movement, and one of the quietest sleeps I’ve ever had in a tent. No flapping, moaning, or buffeting here thanks to the taut pitch and sturdy build. It’s a light sleepers dream. 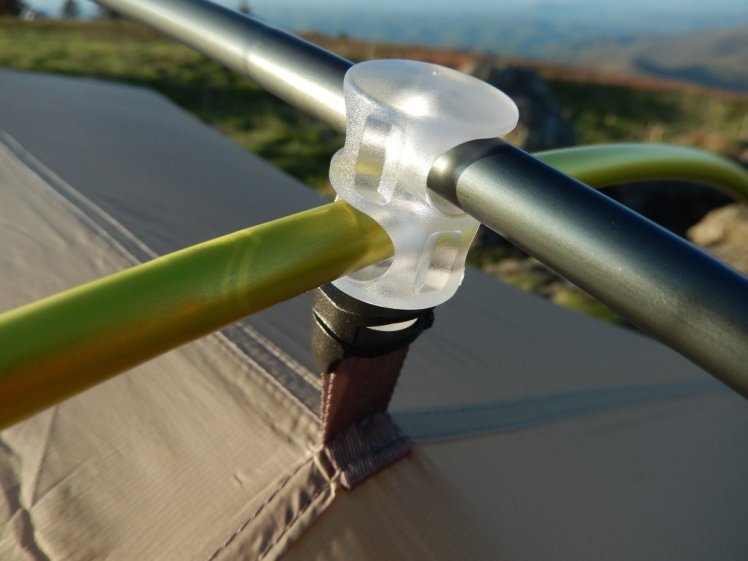 Ventilation is great, with ample opportunity for air flow through the large vent at the foot, wide open vestibules on the sides, and the gaping mesh screen door on the front. A breeze can flow through the tent nearly unobstructed in positioned correctly, or blocked by turning the tent sideways and sealing up the front door. This can either minimize condensation, or maximize protection from the wind. Livability is nice, with plenty of room inside for two users to sit up (closely) without rubbing the head of the tent. Food space is adequate, and elbow room is plentiful enough to avoid each other, most of the time.

Durability is great, with a tough floor that doesn’t require a footprint or careful tent selection, a rigid pole system, and a highly resistant tent fly. It’s a tent that can be trusted, and relied on. Pack weight and size is especially impressive, barely tipping the scales and taking up minimal pack space. Pitching the tent is as easy as possible. Lay down the tent, apply the poles and stakes and you’re done. No tent body and separate body to deal with. 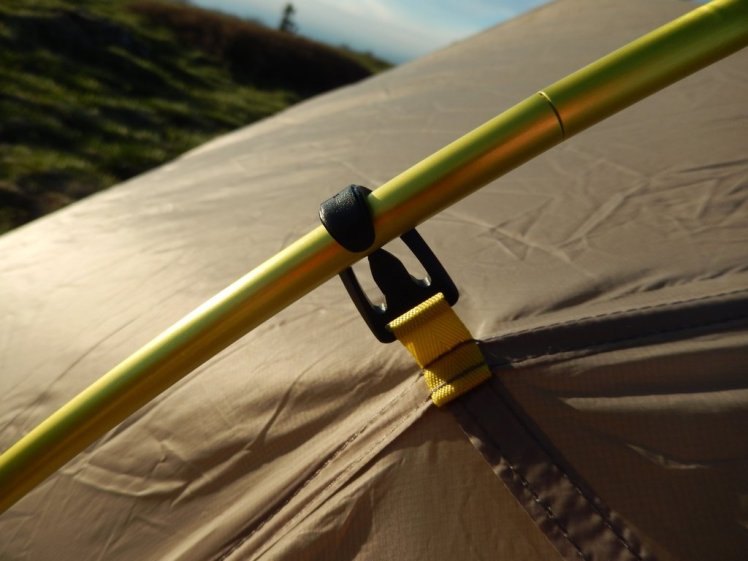 The lower end of the tent is a single wall, which cuts weight and reduced pack size. The downside to this is condensation will build up (as with any tent) and needs to be managed internally with a pack towel. I’ve never had it rain inside the tent from falling droplets of moisture as with other tents I’ve tested, but the foot of the tent does leave an exposed single wall where users tend to slide against the wall, right at the foot of the sleeping bag (below image). This can cause the sleeping bag to draw in some of this moisture. At it’s worst, it’s only been an inconvenience, but it is notable. I would like to see this issue eliminated in future designs. I’m being harsher here than on the last years model, as it’s still an issue that hasn’t been corrected. I’ve had no issues when using the tent solo, as you’re not cramped for space at the foot. I’ve never had any issues around the head of the tent either.

Organization is limited, with two small pockets situated near the head that basically lay your equipment on the floor of the tent. Linear accessory attachment points inside can make for tricky hanging of damp socks, camp towels, and camp accessories. It’s a single linear trail of connection points. It works, but it’s not ideal. I would like to see the protective wall on the front door unzip just a little bit further down, allowing viewing of the outside while laying down if desired.

Sierra Designs has made a great tent even better with the new FL update. Lighter, more storage space, and more packable, all without sacrificing any stability, livability or durability. Generous storage, with a well thought out living space and an awning for viewing during nasty weather makes for a tent that’s a pleasure to be inside of, instead of feeling like a punishment. Aside from a minor issue with condensation at the foot, I cannot see any reason to not recommend this tent to anyone. Still a favorite.